Friday, 20th April: GBC phones police to report his wife missing  around 7.15am. Police establish a command post at the Brookfield Showgrounds to co-ordinate an extensive search for the mother-of-three.

Two days after his wife disappeared, Mr Gerard Baden-Clay crashed into a pillar at the Indooroopilly Interchange. When he was asked about the accident, which resulted in his hospitalisation, Mr Baden-Clay answered a Channel Nine reporter almost bashfully.
I was hurt a little bit, but I’m OK,. “He was treated with very minor injuries and initially had sore ribs,” the DCS spokesman said. 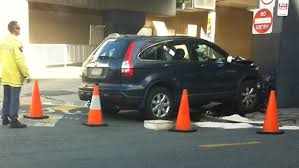 Sunday, 29th April: GBC attends church with his three daughters and then spends one hour at Indooroopilly police station receiving an update from police on the search for his wife.

Monday, 30th April: Police reveal a body has been found by a canoeist under the Kholo Creek bridge at Anstead at around 11:00am. Investigators are searching for information about the movements of the Baden-Clays’ cars between 8:00pm Thursday night, 19th April, at 6:00am Friday morning. 20th April – a white Toyota Prado and a silver Holden Captiva.

Tuesday, 1st May: Police confirm that the body discovered is that of Allison Baden-Clay.

Friday, 11th May: Allison Baden-Clay’s funeral is held in Ipswich and attended by hundreds.

Monday, 28th May: GBC relocates his new business to the Toowong Tower.

Wednesday, 13th June: Gerard Baden-Clay is charged at 6:30pm with his wife’s murder and improperly interfering with her body.

Thursday, 14th June: GBC faces court for the first time. He is remanded in custody until 9th July. He is taken from Brisbane Watchhouse to Arthur Gorrie Correctional Centre. His lawyers lodge an application for bail on behalf of their client in the Supreme Court.

In refusing bail, Justice David Boddice said he considered Baden-Clay a flight risk but in an affidavit dated June 21, about a week after his arrest, Baden-Clay denied he was a flight or suicide risk.

“I’ve never considered it. I maintain my innocence and will be strenuously defending the charges,” he said.

“I note that no attempts of self harm have been made by me despite the intense media scrutiny, and the report of me as a person of interest as early as April 23, 2012.”

Opposing bail, prosecutor Danny Boyle claimed Baden-Clay was more than $1 million in debt and stood to gain $967,000 from his wife’s life insurance and superannuation.